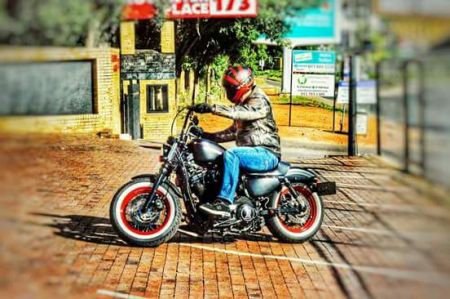 Celebrating 60 Years of the Sportster® with Kallie!

The Sportster® range turns 60 this year and what an epic journey it has been! Our motorcycle sales consultant, Kallie has a special bond with the Sportster® range. The first Harley® motorcycle that Kallie ever rode (in 2003), was a Sportster 883 Standard. Since then, Kallie’s love for these bikes has grown, ending with him purchasing his very own Sportster® Forty-Eight® motorcycle!

Because Kallie loved the quick and nimble aspect of the Sportster® range and the fact that they are the perfect bikes to commute on and customise, he ended up making many changes to his Forty-Eight®. Kallie is rather tall, and so he added “mini ape hangers” (taken from a Dyna® Street Bob®) and blacked them out so that he could ride his bike in comfort. He also
added a bigger fuel tank from an Iron 883™ motorcycle which allowed for further range without compromising its Sporty looks. For that extra power, Kallie added Vance & Hines Big Radius pipes with a heavy breather and race tuner. He also took it to the next level by having it dyno tuned!

In altering his bike’s looks, Kallie blacked out the bike, had the wheels made red with white walls and added a Brawler seat. These are just a few points of his customisation that made his Forty-Eight® a true reflection of his personality!

The Sportster® range has had many changes over the years. Most notable are the improved suspensions, ABS braking and keyless ignitions. From 2004, there was a complete frame change and in the 2007 model year bikes, Harley® introduced fuel
injection for the range.

The Sportster® range is truly a reflection of the iconic brand that Harley® is. From cutting through traffic, to epic customisation
options, these nifty motorcycles have proven to be incredibly adaptable.

We’re celebrating 60 years of Sportster®-loving by offering you a fixed premium with the purchase of any new Street or Sportster® model! Details: http://harley-davidson-tygervalley.co.za/promotion...