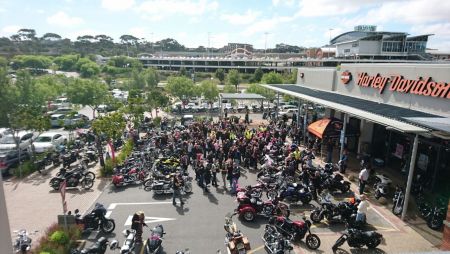 Over 150 people gathered at Harley-Davidson® Tyger Valley for the Pink Noise Motorcycle Charity Parade on 29 October 2016. The atmosphere was one of excitement as bikes pulled up and the air filled with the sound of motorcycle engines rumbling.

Riders joined together for a briefing before the mass ride and soon they were off! Taking a round route of roughly half an hour, the thunder of the mass ride attracted plenty of attention on the highways. As participants arrived back at the dealership, everyone was given a free boerie roll & cool drink! The Soft Machine was also on hand to serve up their creamy soft serve to those that needed something delicious to help cool down after the ride.

With stomachs satisfied, the crowds began to gather inside for the live burlesque performance! The Dance Studio Cape Town put on a magnificent show and even performed an extra number as the crowd called for an encore! After the main performance, winners of the raffle competition were called up to collect their prizes.

The day ended off with many attendees staying afterward for cold beverages upstairs at the Tyger Tavern. A great day was had by all and we look forward to hosting our next charity fundraiser in 2017! Hope to see YOU there!