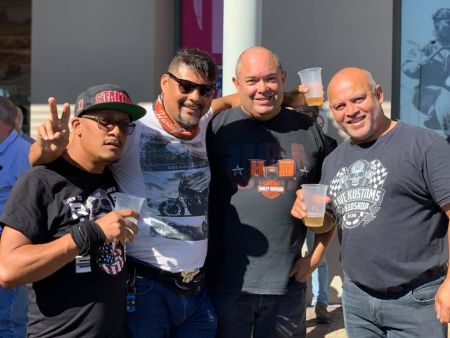 We cannot resist hosting events that are a little out of the norm, and Viva La Freedom on Saturday 27th April was no different. This event was in honour of Freedom Day which is an annual celebration of South Africa's first non-racial democratic elections of 1994. The Harley-Davidson® brand is heavily steeped in the concept and idea of Freedom, so this event was the perfect blend of the two!

Our team rocked up from 7:30am to set up and ensure that our dealership was ready for the influx of Harley® family. From climbing ladders to put up banners, to setting out cones to mark off the concourse area, there was plenty to do! Speaking of the concourse – we were privileged to be able to view some really iconic motorcycles. From a legendary Springer, to a brand-new CVO™, there was a bike to suit all tastes! Not to mention a Hayabusa that would turn even the most stubborn head.

Congratulations to the winners:

The Stone Mountain Gang put on a real show for all attendees and kept our head’s bobbing to familiar tunes for most of the day. For those in the mood for an ice-cold beer and a Prego roll, Diesel & Dust craft beer along with the Tyger Tavern, kept everyone well fed and hydrated! Having battled a little to find brave souls to enter the burnout competition, we managed to find a bike in our fleet that was about to be serviced and have a tyre change, to put on a smoky show! Our sales manager, Kallie, put rubber to tar and produced enough smoke to choke a small army!

For those who have never ridden a motorcycle, or even for those who just wanted to give it a try – our Jumpstart was available with a Street Rod™ mounted to it. We had specials on fashion and chrome, as well as epic bike deals. It’s safe to say – this event catered to all.

A heartfelt thank-you to every person that came through and had a blast with us. We appreciate your support greatly and look forward to many more successful events in the future.