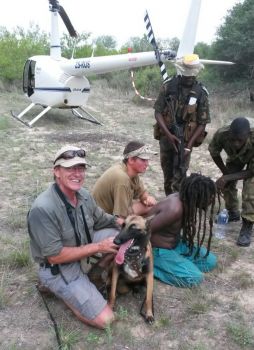 From June 2015 till the end of August 2015, Harley-Davidson® Tyger Valley and Harley-Davidson® Durban ran a joint competition where one very lucky person could win an XG Street 750™ motorcycle! Waiting to see who the winner would be was almost unbearable! With such a kick-ass prize up for grabs, it’s no wonder…

On the 5 of September, Neil Harvey was the lucky name picked from all the entrants in the random draw which was done at the Harley® Tyger Valley branch. Neil was contacted the same day and told of his amazing prize! Though very excited, Neil is completely happy with his current Harley® motorcycle and asked us to sell the Street 750™ on his behalf. Neil also asked us to donate half the proceeds to a charity of our choice. What an incredibly generous act of kindness!

A cause very close to our hearts is the conservation of the rhino population in Southern Africa. The money allocated to the donation is being given to a very worthy organisation: an anti-poaching unit on a game reserve in the Lowveld of South
Africa. This anti-poaching team work tirelessly night and day to protect both the white rhino and highly endangered black rhino species that reside on their game reserve. Allowing these species to live and breed in safety is of highest importance so that future generations also have the opportunity to see these beautiful creatures.

It goes without saying that this game reserve will not be named on social media or on the internet as safety is a major issue for them. With poaching intelligence at an all-time high, we must do all we can to keep these farms out of the limelight until such a time as the rhino population recovers enough to no longer be at risk of extinction.

Pictured in our article is Mario, head ranger of the anti-poaching team on Christmas Day 2014 with a poacher that was apprehended. We commend them on all their hard work and will continue to support their efforts in any way possible!