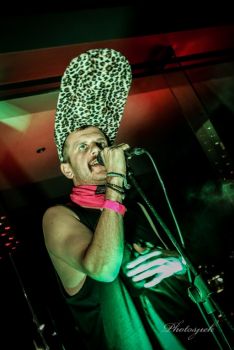 The 16th of September was a night to remember at Harley-Davidson® Tyger Valley as we hosted the first leg of the "Fearless Tour" featuring Jack Parow & Loki Rothman.

As the queue grew at our dealership entrance, we knew the night ahead was going to be special. Loki, who is Jack Parow's guitarist, is also an artist in his own right. Opening the stage with an incredible performance accompanied by Hiram Koopman, Loki absolutely rocked our socks off with his unbelievable guitar skills!

After a short break, The crowd whistled and cheered as Jack Parow took to the stage. His performance was nothing short of EPIC and he had the crowd eating out the palm of his hand as he recited his catchy tunes! All ticket holders had their names entered into a lucky draw for the chance to win a Street 750™ motorcycle. Jack drew 5 names at the end of his performance - these names will be entered into the final draw which will be done on 12 Oct '15 in Cape Town.

Thank you so much to everyone that partied with us for this great cause and special mention to Paul van der Schyff who generously donated R5000 on the night of the concert!!

Our next event to diarise is the Pink Glove Run on 31st October '15 where we will be doing a mass ride to show support for CANSA also in aid of breast cancer awareness.